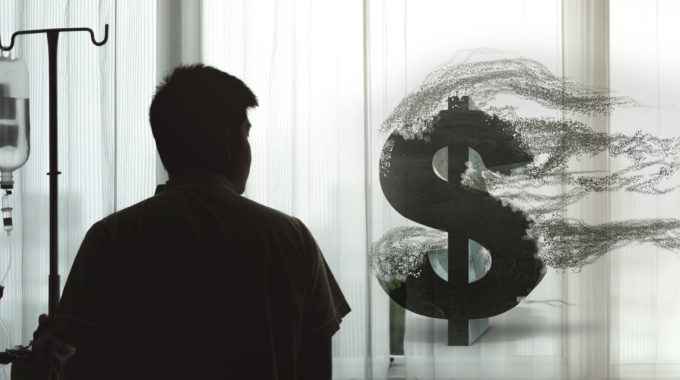 The unique structure of the Medicare Hospice Benefit, an all-inclusive benefit that reimburses providers on a per diem basis, has created the opportunity for exploitation through a number of profiteering practices. By accepting the per diem payment, hospices are responsible for all expenses related to the hospice patient’s terminal diagnosis, including the hands-on care of nurses, nurses aides, social workers, chaplains and physicians; medical equipment; medical supplies; and prescription and over-the-counter medications. Providers can maximize profits either by limiting the services provided, admitting patients who require minimal care, increasing the number of days of care each patient receives—or a combination of these factors. In profit-focused hospices, the number of visits a patient receives, the amount and type of care provided, and the diagnoses of the patients admitted all can determine potential revenues and profit margins. A profit-maximizing business model does not necessarily factor in the needs of the patient, the patient’s family, the healthcare community and the community are large.2

For example, two troubling reports issued by the Office of Inspector General (OIG) of the Centers for Medicare & Medicaid Services (CMS)3 in the summer of 2019 garnered widespread media coverage because of shocking stories of negligent care and performance deficiencies detailed in the report. Poor management of pain, missed visits, lack of quality controls, and inadequate vetting and training of staff were just some of the problems noted in the report—problems that were compounded by weak oversight from CMS. The adoption by certain providers of a business model based on cutting corners on appropriate care to maximize profit largely has gone unrecognized and unpunished in the past. It, nevertheless, is an abuse of public funds intended for the compassionate care of the dying and it also is a betrayal of the good faith and trust placed in the hospice community through the creation of the Medicare Hospice Benefit.

There are also numerous examples in the OIG reports and elsewhere of hospices enrolling patients who are likely to have very long lengths of stay while requiring minimal care.4 In addition, some hospices have been found to discharge patients when they require more care.5 The malicious intent to maximize profit is evident in these business strategies, which results in a shifting of dollars intended for the care of the dying to the coffers of profit-focused organizations.

Many of these profit-focused hospices often don’t even make the effort to hide their focus on profit-making. For example, Rich Tinsley, president of a healthcare mergers and acquisitions firm, in April of 2018 lamented, “Margins in hospice also could be within the 15 to 20% range, though few in the industry are hitting that mark. Nonprofit hospice providers still make up a significant portion of the space, which may be one reason margins aren’t as high, as organizations aim to fulfill their missions rather than turn a profit.”6 Some hospices even have a rage-inducing view of the cost of doing business. Commenting on a $75 million fraud settlement, the CEO of Vitas, one of the nation’s largest hospice companies, stated, “The $75 million settlement over a decade of billings should be kept in perspective with more than $1 billion in annual revenue at the nation’s largest hospice provider.”7 These statements give the impression that not only should profits be higher, but that some costs are worth the risk when weighed against the potential for substantial revenue gains.

“For those of us in the hospice movement who have devoted ourselves to the mission of delivering quality care to the dying, the 2019 OIG reports, as well as older, similar reports, are more than troubling and discouraging. When these official reports are combined with the boastful comments from companies about their profit-making strategies, we’re shocked—and dismayed—that we haven’t seen greater, more concentrated efforts to limit profiteering and curb these acts of maleficence,” said Jeff Lycan, president of the National Hospice Cooperative (NHC). All of the ethical underpinnings of our society come into play when we talk about care at the end of life,” Lycan continued. “It involves the right to quality, compassionate care, recognizing the vulnerability of the patient and family, and the responsibility of the provider to deliver appropriate care. These are the values that are under fire when profit-making is prioritized over patient care.”

The 2019 OIG reports were issued five years after the Washington Post began publishing a year-long, intermittent series, “Business of Dying,”8 which, among other issues, examined the business practices of profit-focused hospices. The data analysis in the Washington Post study, which was based on hundreds of thousands of Medicare patient and hospice records, showed a striking and consistent gap between for-profit and not-for-profit providers. Based on the data, The Washington Post concluded that the typical for-profit hospice company:

The Status of Quality Measure Development in Hospice – Part 4

Hospice Compare: Input and Advocacy: Hospice Leaders’ Opportunity to Guide the Process Given that both…

The Status of Quality Measure Development in Hospice – Part 3

Hospice Compare: Filling the Gap: HOPE and Claims-Based Measures To address this issue and to…

The Status of Quality Measure Development in Hospice – Part 2

Download our White Paper, Profiteering: Putting Financial Goals ahead of Quality Care for the Terminally Ill 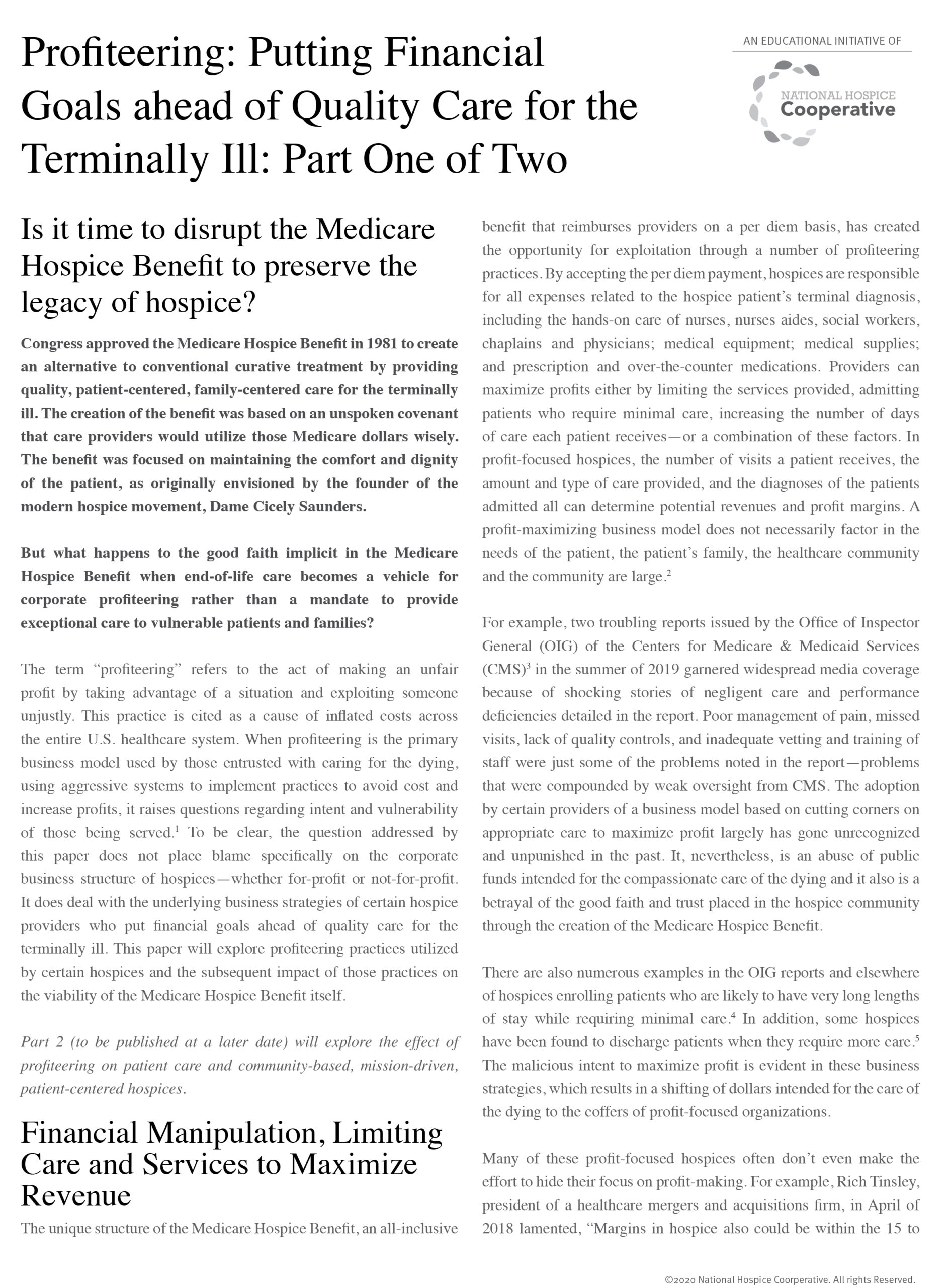 Share this important White Paper with your colleagues and friends. This issue affects us all. Spread the word.

Sign up to receive news and information – and future White Papers – from Ohio’s Hospice. Together, we can protect the original hospice vision for our families today and for generations to come.

Our mission is to provide world-class, business support services, maximizing financial and process efficiencies to empower community-based, not-for-profit hospice providers to focus their resources on the delivery of quality care.
Copyright National Hospice Cooperative 2023 - All Rights Reserved
Back To Top